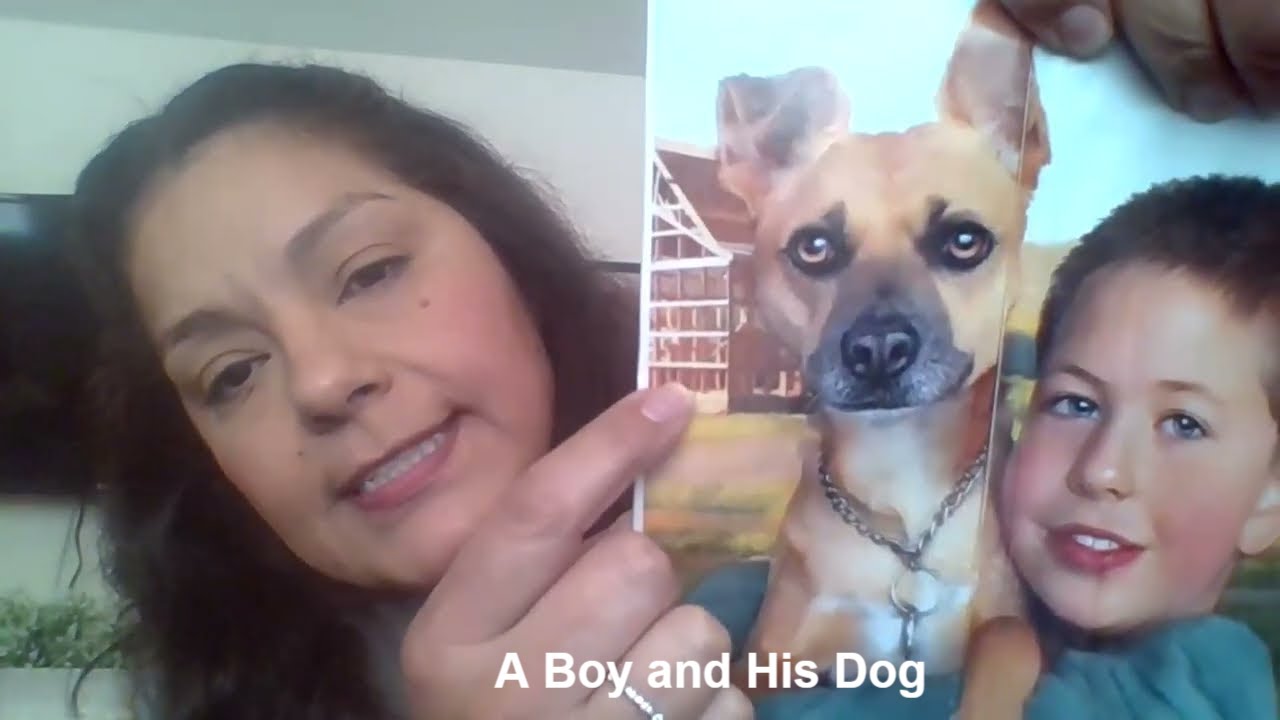 Good morning boys and girls and Happy Sabbath. This is teaching Marissa from Sabbath School. And thank you for coming to church. And for those online. Thank you for logging in.

Well, today’s story is about a boy and his dog. The boy’s grandpa had passed away and died. So the family was gonna go drive to Washington to get ready for his memorial service. So his mom, his sister, the little boy and the little boy’s dog drove to Washington a few days earlier. And later, his dad was gonna fly in for his service. Now the little boy like to bring his dog everywhere because it brought him happiness. And because it made them comfortable, and he just couldn’t leave his dog back home. And the name of his dog was Ginger. And he had one floppy ear, and one ear that’s standing up, see that? That’s Ginger and the boy.

So when we got to Washington, the next morning, his grandpa’s house was really big. And it was on the big lot. So the field was really big, kind of like a barn, like a farm. So that morning, the next morning, a little boys decided he couldn’t wait to take the dog outside so the dog can have some fun. So they went outside. And their dog was running back and forth, back and forth. Jumping really fast. He was also pooping everywhere. I mean, the dog was having a good time of that big field, right? So then the little boy was looking around as well. And he saw that there was a neighbor in the back. That was constructing a barn you see that? Right there? Well the little boy start looking at the construction site and seeing everything going on. And he also was talking to the neighbor and asking him all these questions. While they were talking, he kept an eye on the dog because he didn’t want the dog to maybe like, you know, escaped through the fence or anything happened to him. So he was talking to the neighbor, and then when he get when again to look at its dog. He started looking everywhere, and then faster, and then faster and he couldn’t find him. And then he started to panic. Right?

Where was Ginger? Ginger! Ginger! and he couldn’t find her. And his eyes were going everywhere. He started walking really fast. He kind of wanted to cry. And then he finds her. She looks super sad. And he looks into her eyes because, something’s wrong with Ginger. So he runs fast to get Ginger. And he picks her up. And Gingercan’t walk and she falls down. And then he tries to pick her up again. She takes a couple steps and she falls down. What’s wrong with Ginger? And he goes, She can’t walk so I’m going to carry her. He tried to carry into the house but she was kind of heavy. He’s like, Oh, I can’t do this. I can’t do this. I can’t do this. Oh, Jesus. He said he prayed Oh, Jesus, please help Ginger be ok. Please helper be Okay. So he put her down. And then he ran to the house. So he run run run, run, run, run, mom, mom Hurry up. You gotta come You gotta come something’s wrong with Ginger.

You know how mommies are sometimes “what is it?” Mom! Come on. So mommy comes out and be see Ginger on the floor looking super sick. So mom picks her up, takes her to the house, wraps her in a towel and she says we got to go to the vet. They have go to the veterinarian. Now the vet is the doctor for animals. So they jump into the car. They jump into the car and the little boy has Ginger on his lap right now Ginger is a dog so when you get in the car you know how dogs get in the car they’re looking out the window and looking at the other window but this time Ginger was just laying on his lap and little boy was “She’s gonna die Mom! She is gonna die. What’s wrong, my dog” and the little boy kid putting his ear on her belly to see if he can hear her breathe. And just very little he can hear her breath.

Mom hurry! The veterinarian was only like 10 minutes away. But to him it seemed like forever. For finally they get there. They jump out of the car. They run to the veterinarian’s office. And when they get there at the door, it says, Sorry, we’re closed. He said, she’s gonna die. She is going to die. I don’t think she can survived this. So they drive to another veterinarian, and the veterinarian was open. So then they rushing, right. And they took everything to the vet. We she was running around, she was playing. She was chasing gophers. He told her little boy told them that they’re like gophers. Yeah, there was a lot of gophers, those are little animals and make holes in your backyard that nobody really likes. So um, she was chasing them. And after that, I didn’t see her. So the veterinarian said, Okay, wait in the waiting room, and I’ll take her back with me. So they went to go wait in the waiting room. And while they were waiting in the waiting room, they can hear a little bit. Ginger, she making whinning sounds. The little boy was so worried. And it was taken a long time, me and him and his mom, once again, prayed for ginger to be okay.

So then the veterinary comes back out and she goes after running a lot of tests, it seems that your dog has been poisoned. So they thought maybe they were trying to poison the gophers at the door might have also had some of that poison. So the veterinarian said, We’re gonna give her some treatments. Okay, it’s just gonna take a minute, so you guys need to go wait in the waiting room. So the little boys goes “She’s just gonna to die? I don’t know.” And his mom said, let me call your dad and tell him that we’re going to be here for a minute to wait at the airport. So she calls his dad. And then his mom tells him we prayed. Right? Didn’t you pray for Ginger? He’s like, Yeah, now we just have to trust Jesus, that she’s gonna be okay.

So then they’re waiting and waiting and an another hour later, after the treatments. She comes out and they see Ginger wagging her tail. And he says “Ginger, she’s okay.” And the Vet said she’s a little bit tired. But you’re going to have to make sure you give her her medicine, and she gets a lot of rest and she’s going to be okay. So they got Ginger, they went back into the car and they went back home. And then when they got home, then they didn’t just sit around, they started praising Jesus, especially the little boy was Thank you Jesus! Ginger is Okay! She survived, she didn’t die!

Okay, boys and girls. Well, I hope you guys enjoy the rest of your Sabbath. And till next time. Bye!